Apr 24, 2019
Reliance Jio GigaFiber is set to bring a broadband-landline-TV combo service at an as low monthly charge as Rs.

600, according to a media report. Jio GigaFiber is also reported to offer the option to connect at least 40 devices to its smart home network for up to Rs. 1,000. The Mumbai-based telco launched Jio GigaFiber broadband service in August last year, but it is currently available in select regions. Subscribers are required to pay a sum of Rs. 4,500 as a one-time security deposit. 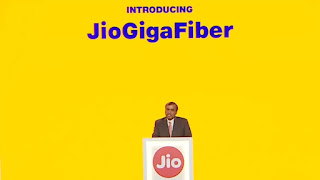 At the present stage, Jio GigaFiberis available under a preview offer for consumers with 100GB of data access every month at a speed of 100Mbps. A report by Mint, citing a person familiar with the development, however, says that Reliance Jio is in plans to expand Jio GigaFiber with a broadband-landline-TV combo at Rs. 600 a month. Under the new service, it is said that the operator will offer unlimited voice calls and 600 TV channels alongside the existing 100Mbps broadband service.
The landline and television services to Jio GigaFiber consumers are said to be available in the next three months, and these will remain free for about a year — just like the existing broadband service.
Reliance Jio is reported to power the combo service through an Optical Network Terminal (ONT) router. This is likely to be the same box router that the company is giving to its initial broadband subscribers. Moreover, the router is said to connect 40-45 devices, including mobile phones, smart TVs, laptops, and connected devices.
To add 40 additional devices to the smart home network created by Jio GigaFiber, consumers are said to pay up to Rs. 1,000. It is also said that the network would also enable storing CCTV footage and other data on the cloud.
The latest report corroborates the development of a triple play planthat was spotted last month to offer access to Jio GigaFiber, Jio Home TV, and Jio Apps in a single monthly package. Also, it is worth pointing out that the arrival of the combo service to counter what has so far been offered by broadband players in India was first reported in May last year.
To recall, Reliance Jio launched its Jio GigaFiber broadband service in August last year. The service is yet to be launched commercially, though it provides a 100Mbps download speed with 100GB data every month in select regions. The operator is charging Rs. 4,500 as a security deposit that is refundable in nature.