formal debut, the smartphone has now been spotted on benchmark portal Geekbench with all its key specifications – of course, the launch is just a day away, and we urge readers to take the listing with a pinch of salt as there is no way to verify its authenticity. The online listing shows the presence of a Snapdragon 625 SoC as well as at least 3GB of RAM. Xiaomi already confirmed that the Redmi Y3 will debut with a 32-megapixel selfie camera. Also, recent teasers have revealed the availability of a 4,000mAh battery and a gradient finish on the Redmi Y3. The new Redmi phone also appeared in a video teaser with a waterdrop-style display notch. 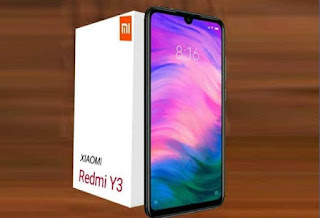 According to the Geekbench listing, the Redmi Y3 will come with a Qualcomm Snapdragon 625(MSM8953) SoC, paired with 3GB of RAM. We can safely presume there will be other variants of the phone — considering the past record of the Redmi series.
Notably, the Snapdragon 625 SoC was powering last year’s Redmi Y2as well as dated Xiaomi models, including the Redmi Note 4. The company, however, may add some software enhancements to distinguish the performance on the new handset. Notably, the authenticity of the Geekbench listing cannot be verified, and we urge readers to take the details gleaned from the listing with a pinch of salt.
The Geekbench listing also highlights that the Redmi Y3 runs Android Pie out-of-the-box. This would come alongside MIUI 10 on top.
In terms of performance, the listing on the Geekbench website shows that the Redmi Y3 has received a single-core score of 1,236 and multi-core score of 4,213. There may be some variations in the Redmi Y3 units that would go on sale post the April 24 launch.
The Geekbench listing shows April 22 as the upload date. It was first spotted by technology blog Nashville Chatter.
As we mentioned, the Redmi Y3 is set to arrive as a successor to the Redmi Y2 with a 32-megapixel selfie camera. Xiaomi also confirmed a 4,000mAh battery, gradient back finishes, and a waterdrop-style display notch. Additionally, the phone recently teased with a dual rear camera setup and a fingerprint sensor.
In addition to the Redmi Y3, Xiaomi could launch the Redmi 7 at its Wednesday event in India. The Redmi 7 series was debuted in China with a 4,000mAh battery and Snapdragon 632 SoC in March.