Apr 24, 2019
Microsoft’s efforts to ensure a smooth rollout for the Windows 10 May 2019 Update continue
with a new notification regarding how the update will behave when users have an SD card or USB storage device plugged in to their PCs. Due to the possibility that these drives will be unmounted and then remounted with different assigned drive letters as a PC is rebooted during the update process. Users whose drives get reassigned might have to deal with shortcuts and playlists not working, and programs not being able to find recently opened files due to their altered file paths. The precaution shows how carefully Microsoft is paying attention to the update experience and flagging any potential issues before they can cause any disruption. 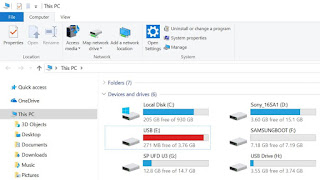 Users who attempt to install the Windows 10 May 2019 Updatewhen an SD card or USB device is plugged in to their PC will see an error message informing them that the installation cannot proceed due to a hardware incompatibility, and that there is no need to worry. Users are also informed that they will be offered the chance to update once the issue is resolved.  However, a screenshot of the message posted by Microsoftdoes not show specifically what the problem is or that the solution is extremely simple.

Photo Credit: Microsoft
All someone has to do when presented with this error message is eject their external storage devices and restart the update process. It will then run without any further trouble. Microsoft seems to be targeting users who leave external drives plugged in for extended periods. SD cards and USB thumb drives are specifically named in the advisory, though all types of storage devices including internal hard drives and SSDs could also have their drive letters changed unintentionally during the update process.
It is relatively easy to reassign drive letters in case of such an occurrence, using the Windows Disk Management utility, though casual users or those who don’t have administrator-level access on their PCs might not want to or be able to tweak system-level settings.
Microsoft goes on to say that the issue will be resolved in a future maintenance update for Windows 10. Some Windows Insider beta program members will not face this issue since the fix has already been applied to test versions of Windows 10. Moreover, users running versions of Windows 10 prior to the April 2018 Update should not be affected either.
The company is carefully managing the Windows Update experience following the disastrous rollout of the Windows 10 October 2018 Update, which caused many users to lose their personal data. The update was withdrawn from circulation and its rollout since then been extremely slow and cautiousin order to catch bugs before they can become widespread. The Windows 10 May 2019 Update will also be rolled out very slowlythough you can install it manuallyright now if you want to.